A Century of Service: Women in War 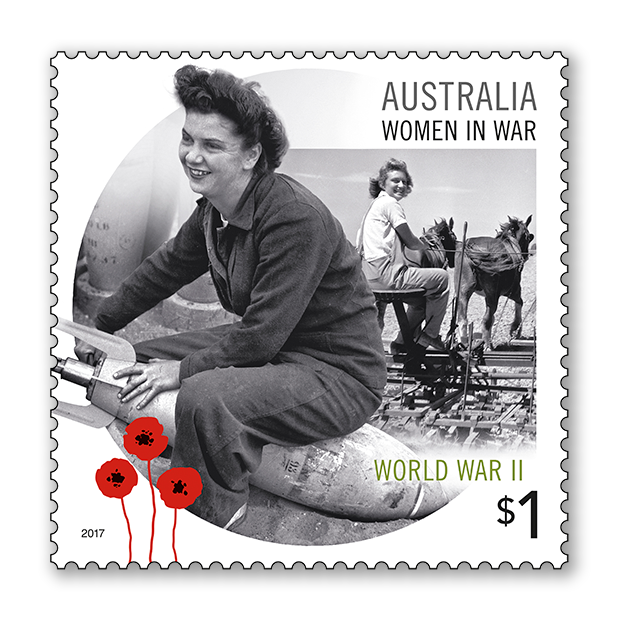 This issue, the fourth in a series commemorating a century of service since World War I, acknowledges the role of women in war and conflict. Prior to and including World War I, the involvement of women in conflict zones was almost entirely limited to nursing. Since then, women’s roles have diversified and today all roles in the Australian Defence Force are open to women.

During the Great War (1914–18), women’s roles were restricted to nursing and efforts on the home front, though women made significant and valuable contributions in these areas. The stamp depicts Ella Clow McLean, a Queensland nurse who joined the Australian Army Nursing Service in 1915. The photograph is from the John Oxley Library, State Library of Queensland. In the background is a Miss Coll, in Melbourne, knitting socks for the troops. That photograph is from the Australian War Memorial collection.

It was not until World War II (1939-45) that war services other than nursing were opened up for women. These roles were in the various auxiliary services that allowed men to serve in combat roles, including agricultural work and technical roles on the home front. The stamp shows, in a photograph from the Australian War Memorial collection, a member of the WAAAF (The Women’s Auxiliary Australian Air Force) and, in the background, a farmworker in the Women’s Land Army, both from 1944.

During the Korean War (1950–53) Australian women continued to serve as nurses, including accompanying injured troops on flights to hospitals in Japan. During Australia’s involvement in the Vietnam War (1962–75), as well as nursing, women participated in a number of roles spanning medical support, entertainment, government and journalism. The stamp shows celebrated war correspondent Kate Webb (in a photograph from Getty Images/Bettman) and Red Cross worker, Rosemary Griggs, both of whom served in Vietnam. That photograph is by Christopher John Bellis and from the Australian War Memorial collection.

Women serve on active duty in the Middle East in key roles such as pilots, medics and combat engineers. Women were also active in service during both the Gulf War (1990–91) and Iraq War (2003–11). The stamp depicts Lance Corporal Ella Jones in 2016, preparing to take part in Operation Okra in Iraq. In the background is Captain Sandi Williams of the Australian Army in Afghanistan in 2015, taking part in Operation Highroad. The photographs are from the Commonwealth Department of Defence.

Since 1947, Australian women have also been active in peacekeeping forces in many countries, including East Timor. The stamp shows Corporal Monique Haeate of the United Nations Peacekeeping Force in Dili in 2002 and, in the background, Major Jessica Cordy of the International Stabilisation Force with local children in Dili in 2012. The photographs are from the Commonwealth Department of Defence.