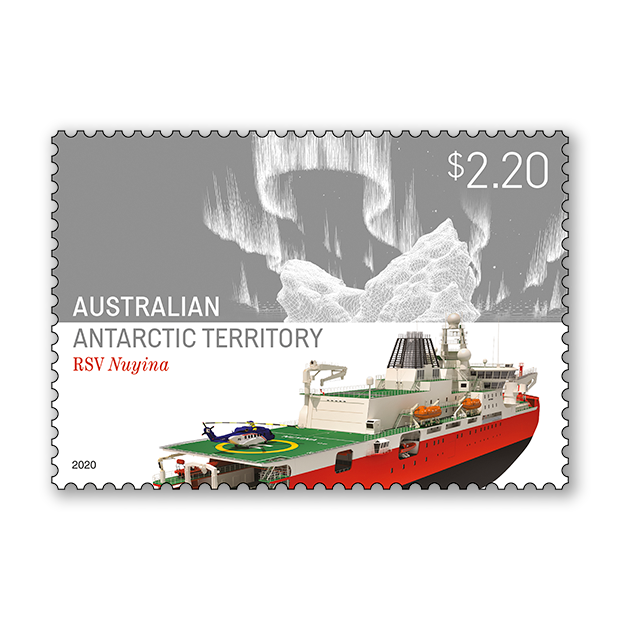 The RSV Nuyina is the new Australian Antarctic icebreaker, replacing the long-serving RSV Aurora Australis, which departed Hobart on its final polar voyage in March 2020. DMS Maritime, a subsidiary of Serco Australia, won the procurement tender for Australia’s new custom-built state-of-the-art vessel, and the Dutch company Damen Shipyards Group began construction of the Danish Knud E Hansen design in Romania in May 2017. The Nuyina has been designed to perform as a scientific research platform, an icebreaker and a resupply ship, and conceived for a 30-year life span, a period matching that of the Aurora Australis. This means the vessel must be designed to fulfil research needs that are not yet known.

Due to depart on its first voyage to the Australian Antarctic Territory in 2021, Nuyina will carry 32 crew and up to 117 scientists and other personnel from the Australian Antarctic Division. Incorporating some 10,000 tonnes of steel in its construction, the vessel is 160.3 metres in length and has a maximum beam of 25.6 metres, making it significantly larger than the Aurora Australis at 94.9 metres, with a 20.3-metre beam.

The four stamps in this issue present differing perspectives of the ship, using renders from the maritime designer’s digital 3D model of the vessel. The second element in the design helps tell the story of the RSV Nuyina, pointing to its functions, identity, and place in Australian polar maritime history.

The Nuyina will fulfil a significant role as a research platform, in both sea ice and open ocean, with its design and facilities supporting research across several fields, from atmospheric studies to geoscience, oceanography, biology and more. In this stamp, the vessel’s stern is depicted with an image of a diatom, magnified thousands of times under an electron microscope. This group of ancient unicellular organisms grows in waters worldwide. The microscopic sea organism sits at the base of the Southern Ocean food web and is an important food source for other keystone marine species, such as krill.

The Nuyina is a ship for the future as much as for the present. It is significantly larger, stronger and faster than the icebreaker it replaces, and its design and construction provide for superior endurance for extended research seasons. Its state-of-the-art design will allow scientists to interrogate today’s critical science issues, as well as research questions that have not yet been conceived. Its design also allows for the operation and support of four light helicopters or two medium helicopters.

Nuyina means “southern lights” in palawa kani, a composite Tasmanian Indigenous language. The name provides a deep connection to Australia and specifically to the first people of its most southern state. The name also links the icebreaker to its southern locale, where the atmospheric phenomenon can be observed, as well as to both its immediate predecessor, the RSV Aurora Australis, and to Douglas Mawson’s earlier Antarctic vessel, SY Aurora.

The Nuyina has been built to perform in the extreme conditions of Antarctica. It will be able to handle waves up to 14 metres (sea state 9), hurricane-force winds (Beaufort 12), air temperatures ranging from -30° to 45° Celsius, and water temperatures from -2° to 32° Celsius. With an efficient cruising speed of 12 knots, the icebreaker will achieve a maximum sustained speed of 16 knots in open water and will break ice at a continuous 3 knots in ice 1.65 metres thick.

This set of stamps contains all four stamps from the AAT: RSV Nuyina stamp issue. The AAT: RSV Nuyina minisheet consists of the four stamps from the issue incorporated into a miniature stamp sheet.