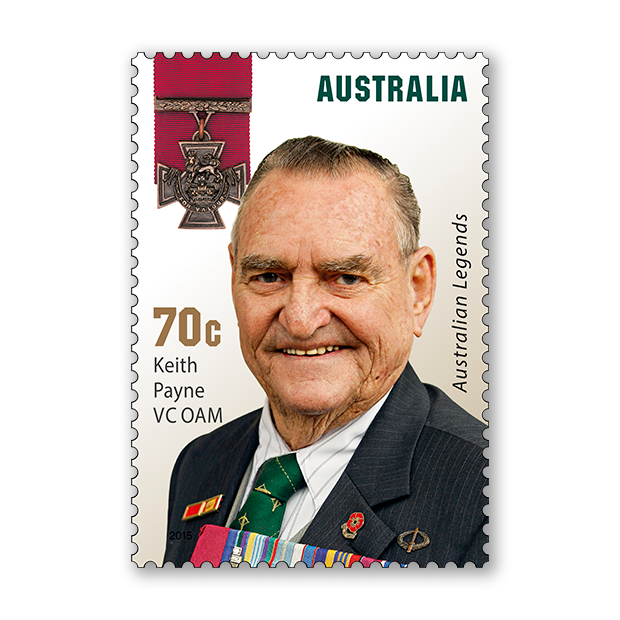 Since 1997 the annual Australian Legends Award honours eminent living Australians who have made a lasting contribution to Australian identity and way of life. The Award itself includes a gold replica stamp presented to each recipient at an Australia Day lunch. Past recipients have included Sir Donald Bradman, Medical Scientists, Barry Humphries, Philanthropists, Fashion Legends, Legends of the Screen, and Legends of Cooking.

“Warrant Officer Payne's repeated acts of exceptional personal bravery and unselfish conduct in this operation were an inspiration to all Vietnamese, United States and Australian soldiers who served with him. His conspicuous gallantry was in the highest traditions of the Australian Army.”

Keith Payne VC OAM was born in Ingham, Queensland in 1933. He joined the Australian Army in 1951 and served in the Korean War in 1951–1952. In 1969, after service in Malaya and New Guinea, Payne, by then a Sergeant, was posted to the Australian Army Training Team Vietnam.

Payne was awarded the Victoria Cross for “conspicuous gallantry” in Kon Tum Province, South Vietnam in 1969. On the night of 24 May, he was commanding the 212th Company of the 1st Mobile Strike Force Battalion when it was attacked by a strong North Vietnamese force. His company was isolated and, surrounded on three sides, Payne's Vietnamese troops began to fall back. Payne, by now wounded in the hands and arms and under heavy fire, covered the withdrawal before organising his troops into a defensive perimeter. He then spent three hours scouring the scene of the day's fight for isolated and wounded soldiers, all the while evading the enemy who kept up regular fire. He found some forty wounded men, brought some in himself and organised the rescue of the others, leading the party back to base through enemy dominated terrain.

Payne received his VC from the Queen aboard the Royal Yacht, Britannia, in Brisbane on 13 April 1970. He retired from the Australian Army in 1975, but saw further action as a captain with the Army of the Sultan of Oman against communist forces in the Dhofar War in 1975 and 1976. Payne is one of Australia’s most highly decorated members of the Australian Defence Force. In 2006 he received the Medal of the Order of Australia (OAM) for service to the veteran community. Keith Payne was also the only Australian soldier to be awarded the United States Distinguished Service Cross during the Vietnam War.

For most conspicuous acts of gallantry in action in a circumstance of great peril in Afghanistan as part of the Special Operations Task Group during Operation Slipper, Uruzgan province, Afghanistan.

Mark Donaldson VC was born in Waratah, Newcastle, New South Wales in 1979. Corporal Donaldson enlisted into the Australian Army on 18 June 2002 and was posted to 1st Battalion, Royal Australian Regiment, Townsville, Queensland, in November that year. It was at this time that Donaldson decided to pursue his ambition to join the Special Air Service Regiment. In February 2004 he successfully completed the Special Air Service Regiment selection course and was posted to the unit in May 2004, where he deployed on operations to East Timor, Afghanistan and Iraq.

On 2 September 2008, Corporal Donaldson (then Trooper) was involved in an incident in Uruzgan province, Afghanistan. During a prolonged and effective enemy ambush, on numerous occasions he deliberately drew the enemy's fire in order to allow wounded soldiers to be moved to safety. As the battle raged around him he saw that a coalition interpreter was lying motionless on exposed ground. With complete disregard for his own safety, on his own initiative and alone, Trooper Donaldson ran back eighty metres across exposed ground to rescue the interpreter and carry him back to a vehicle. Trooper Donaldson then rejoined his patrol and continued to engage the enemy while remaining exposed to heavy enemy fire.

For this action Donaldson was awarded the first Victoria Cross for Australia and become the first Australian in almost 40 years to be awarded the nation’s highest military honour. He was invested by her Excellency the Governor-General of Australia at Government House, Canberra on 16 January 2009. Corporal Donaldson remains posted to the Special Air Service Regiment in Perth, Western Australia.

For the most conspicuous gallantry in action in circumstances of extreme peril as Patrol Second-in-Command, Special Operations Task Group on Operation SLIPPER.

In 2003, Corporal Roberts-Smith completed the Special Air Service Regiment selection course and was posted to the unit. While with the Special Air Service Regiment, Corporal Roberts-Smith was a member of a number of training and assistance teams throughout South-East Asia. He was deployed on operations to Fiji in 2004, and has also deployed on Recovery Operations, as well as a number of personnel security detachments in Iraq throughout 2005–2006. In 2006 Roberts-Smith was deployed as part of the Special Operations Task Group in Afghanistan, where he was subsequently awarded the Medal for Gallantry.

Corporal Roberts-Smith was awarded the Victoria Cross for Australia for his actions during an operation in Tizak, Afghanistan on 11 June 2010 as the patrol commander. During the offensive he single-handedly charged and destroyed two Taliban machine gun positions. Roberts-Smith was invested by Her Excellency the Governor-General of Australia at Campbell Barracks, Perth, on 23 January 2011.

In 2013 Corporal Roberts-Smith transferred to the Army Reserve after 17 years of service with the Australian Army, including 10 years with the Special Air Service Regiment.

For the most conspicuous acts of gallantry and extreme devotion to duty in action in circumstances of great peril at Derapet, Uruzgan Province, Afghanistan as part of the Mentoring Task Force One on Operation Slipper.

Dan Keighran was born in Nambour, Queensland in 1983. He enlisted in the Australian Army on 5 December 2000. In 2001, Corporal Keighran was posted to the 6th Battalion, Royal Australian Regiment where he served as a rifleman. He deployed to Rifle Company Butterworth, Malaysia in 2001, on Operation Citadel (East Timor) in 2003–2004 and again to Rifle Company Butterworth, Malaysia in 2004.

Corporal Keighran was promoted to Lance Corporal in 2005. In 2006, he deployed on Operation Catalyst (Iraq) where he served as a Bushmaster protected mobility vehicle driver, a role he also filled on deployment to Afghanistan with Operation Slipper in 2007, where he served in support of the Special Operations Task Group. In 2009, he was promoted to Corporal and posted back to 6th Battalion. In 2010, Corporal Keighran deployed to Afghanistan on Operation Slipper with Mentoring Task Force 1 (MTF-1), becoming a mentor midway through his tour.

He was awarded the Victoria Cross for Australia for actions in the Battle of Derapet, Uruzgan province, Afghanistan in August 2010. Corporal Keighran deliberately exposed himself to enemy fire, drawing the fire away from an injured colleague and those who were attending to him. He was the third recipient and the first non-Special Forces recipient of the award. Keighran was invested by Her Excellency the Governor-General of Australia at Government House, Canberra on 1 November 2012.

Corporal Keighran transferred to the Active Reserve in 2011, at the same time commencing a civilian career in the mining industry. He is currently posted to Army Headquarters in Canberra.

For the most conspicuous acts of valour, extreme devotion to duty and ultimate self-sacrifice at Ghawchak village, Uruzgan province, Afghanistan as a Commando Team Commander in Special Operations Task Group on Operation Slipper.

Cameron Stewart Baird VC MG was born in Burnie, Tasmania, in 1981. He was killed in action by small arms fire in an engagement with insurgents in the Khod Valley, Uruzgan province, Afghanistan on 22 June 2013.

Corporal Cameron Baird enlisted in the Australian Regular Army in 2000, was discharged in 2004, and re-enlisted in 2006. In both periods of service, he was assigned to the 4th Battalion, Royal Australian Regiment (Commando) – now known as the 2nd Commando Regiment. His operational service includes deployments to East Timor, Iraq and Afghanistan. He was awarded the Medal for Gallantry for his service in Afghanistan in 2007–2008.

Corporal Baird was posthumously awarded the Victoria Cross for Australia for his actions in the Khod Valley, Uruzgan province, Afghanistan. On 22 June 2013, a commando platoon of the Special Operations Task Group, with partners from the Afghan National Security Forces, conducted a helicopter assault into Ghawchak village, Uruzgan province, in order to attack an insurgent network deep within enemy-held territory.

On three separate occasions Corporal Baird charged an enemy-held building within the prepared compound. On the first occasion he charged the door to the building, followed by another team member. Despite being totally exposed and immediately engaged by enemy fire, Corporal Baird pushed forward while firing into the building. Now in the closest proximity to the enemy, he was forced to withdraw when his rifle ceased to function. On rectifying his rifle stoppage, and reallocating remaining ammunition within his team, Corporal Baird again advanced towards the door of the building, once more under heavy fire. He engaged the enemy through the door but was unable to suppress the position and took cover to reload. For a third time, Corporal Baird selflessly drew enemy fire away from his team and assaulted the doorway. Enemy fire was seen to strike the ground and compound walls around Corporal Baird, before visibility was obscured by dust and smoke. In this third attempt, the enemy was neutralised and the advantage was regained, but tragically, Corporal Baird was killed in the effort.

Corporal Baird’s parents were invested with the award by Her Excellency the Governor-General of Australia at Government House, Canberra on 18 February 2014.

Corporal Baird is only the fourth recipient of the Victoria Cross for Australia and the first to be awarded posthumously. He is the 100th Australian to receive a Victoria Cross since the award was first was created by Queen Victoria in 1856.