Postcards to the Front 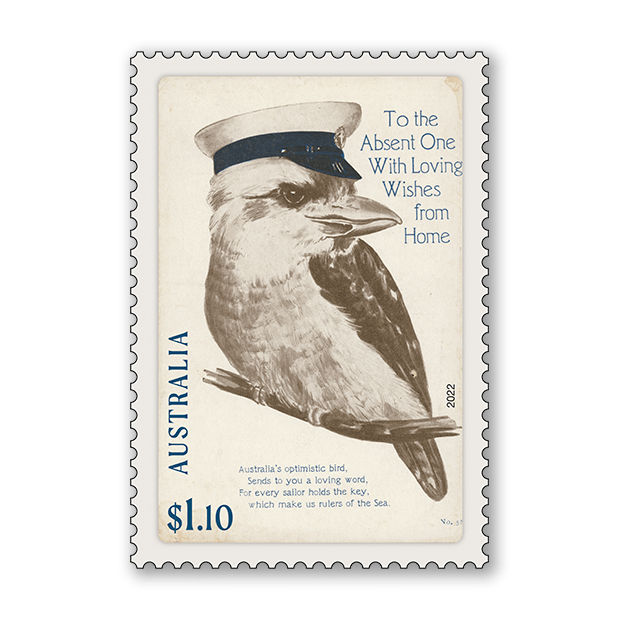 While Anzac Day stamp issues typically reflects themes of military participation and commemoration, this year the focus is on ephemera, specifically postcards.

World War I (1914–18) coincided with the last years of what was known as the “golden era” of postcards, and the outbreak of war immensely expanded the postcard market. Postcards facilitated a connection between family and those serving on the front. The visuals and written phrases on the cards were often patriotic and nationalistic in nature, though many were also sentimental, which, when combined with the words of the writer, sent much-needed messages of love, longing and encouragement during times of painful separation.

The postcards shown on this year’s stamps represent the military divisions through naval, infantry and air service hats worn by the iconic Laughing Kookaburra. The cards, produced by Valentine & Sons Publishing Co. in Australia, are held in the Shirley Jones Collection of Military Postcards, State Library Victoria. While these postcard designs can be seen as patriotic and good humoured, they also conveyed the sadness and uncertainty felt by those whose loved ones were serving their country half way across the world and in perilous circumstances.

This postcard features the Laughing Kookaburra in a naval hat. The postcard heading states, “To the Absent One with Loving Wishes from Home”, with a verse that is filled with hopefulness and pride: “Australia’s optimistic bird, Sends to you a loving word, For every sailor holds the key, which makes us rulers of the Sea”.

This army-themed postcard, patriotically titled “To my Comrade O’er the Sea”, sends a message filled with hope for a swift reunification: “I give my laughter plenty scope, For my heart is full of hope, But I’ll double my refrain, When I see you home again”.

This kookaburra is pictured wearing an Air Force hat and is sending a message of encouragement from parent to son, titled: “Sincerest Wishes from Australia to my Dear Boy on Active Service”. The card states, “I watch your aeroplane arise, Swiftly to the bright blue skies, And laugh that I may let you know, I wish you well, where-e’er you go”.

Set of Postcards to the Front Gummed Stamps

This set of stamps contains all three stamps from the Postcards to the Front stamp issue. Postcards to the Front Stamp Pack

The Postcards to the Front stamp pack contains all three stamps and minisheet from the stamp issue presented in a high-quality folder. Postcards to the Front Minisheet

The Postcards to the Front minisheet consists of the three stamps from the issue incorporated into a miniature stamp sheet. Set of Postcards to the Front Maxicards

This maxicard set contains the three maxicards from the Postcards to the Front stamp issue.