On 1 January 1972, Australia became the first country worldwide to legislate for compulsory seatbelt wearing in front and back seats.

As car ownership and use increased in Australia through the middle decades of the 20th century, so too did the road toll. In 1970, Australia had reached its greatest road toll to date, with 3,798 fatalities. In the early 1960s, it is estimated that only 5 per cent of cars in Australia had seatbelts fitted.

A large study undertaken in the USA by Cornell Aeronautical Laboratory published in early 1960 showed that seatbelts, voluntarily fitted by some motorists, reduced “‘major–fatal’ grade” injuries by 35 per cent. A new Australian federal select committee investigating road safety cited this report later that year, recommending the car industry install approved “Australian standard” seatbelts in all motor vehicles and that the public be educated on the benefits of wearing them. Throughout the 1960s, road-safety campaigns made the case for behavioural change.

Road-user behaviour is among state and territory responsibilities, and Victoria led the way in introducing legislation. Politicians of all persuasions did not necessarily support legislation, in what was essentially a balancing act between public good and individual rights, and there was some public apathy and pockets of resistance. But by late 1970 the ground was shifting in Victoria, following research and lobbying by the medical sector’s Road Trauma Committee, an intensive newspaper campaign and recommendations from a Victorian joint parliamentary committee. The latter suggested a two-year transition period when it tabled its report in September 1969, but the Victorian government introduced the first state legislation mandating seatbelts just a little over 12 months later. New South Wales introduced its legislation on 1 October 1971, and despite ambivalence in other states and territories, by 1 January 1972 legislation was introduced nationwide.

Today, figures indicate that this road-safety measure reduces the risk of fatality and serious injury by around 50 per cent.

The stamp design takes a symbolic and typographic approach to the introduction of compulsory seatbelt wearing, using a bold, graphic style that references poster art.

The single Buckle Up! 50 Years $1.10 gummed stamp is designed by Nigel Buchanan. The Buckle Up! 50 Years sheetlet pack contains the sheetlet of 10 x $1.10 stamps from the stamp issue presented in high quality folder. 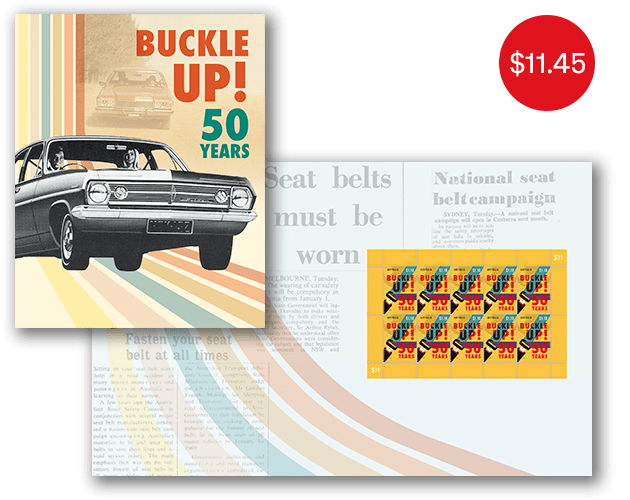 This gummed sheetlet contains 10 x $1.10 stamps from the Buckle Up! 50 Years stamp issue. The Buckle Up! 50 Years maxicard is a prepaid postcard with the single stamp from the stamp issue affixed and postmarked on the view side.