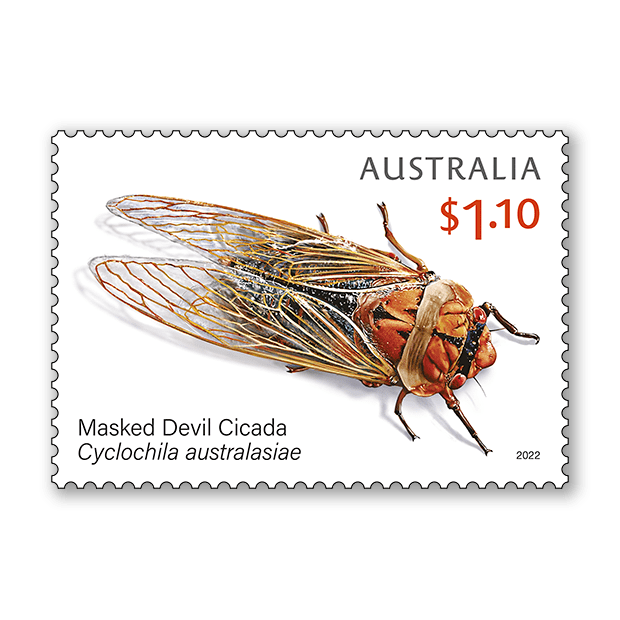 Many of us associate warm summer days with the loud buzzing of a chorus of noisy cicadas. And who hasn’t wondered at their brittle brown exoskeletons left clinging to tree trunks near the beginning of summer?

Our familiarity with these attractive insects is not surprising, as Australia has the greatest diversity of cicada species of anywhere else on the planet. Of the approximately 3,000 different species found worldwide in tropical to temperate climates, it is thought that around 1,000 inhabit Australia, so many that all have not yet been named. Cicadas are found all over the country, from Tasmania to the tropical Far North, in deserts, beach sand dunes, alpine areas and in our most densely populated cities. However, most species are found in the northern part of the continent, with north-eastern Queensland the richest region for species diversity.

The Masked Devil variant of Cyclochila australsiae has an orange thorax and head, with black markings including a band or mask across the eye area; its eyes are red. It is found in mountainous areas and coastal lowland districts of eastern New South Wales. Other morphs of Cyclochila australsiae include the bright green Greengrocer, frequently seen in Melbourne and Sydney; Yellow Monday, which is yellow or orange and has red eyes; the rare blue or teal Blue Monday; and the Chocolate Soldier.

The beautiful, aptly named Golden Emperor (Anapsaltoda pulchra), the only member of its genus, is endemic to the Wet Tropics. Adults live a few metres from the ground, in the trunks and branches of rainforest trees in the Cairns region of northern Queensland, particularly in the Atherton Tableland. With a forewing length of 57 to 62 millimetres, it is among the largest of Australian cicada species. The head and thorax are mainly green with black and orange markings and the eyes are also green. Adult males call during the day and at dusk, from late November to March, with a pleasant song that raises pitch and intensity until suddenly dropping down.

The Sandgrinder cicada (Arenopsaltria fullo) is endemic to Western Australia, from Kalbarri on the mouth of the Murchison River to Margaret River, south of Perth. With a forewing length of 28 to 34 millimetres, this species is the smallest of the three represented on the stamps. A common species in and around Perth, it prefers open heathland on sandy soils, where it can be found in the branches of small trees like banksias and wattles. The Sandgrinder’s head, thorax, abdomen and eyes are black or brown, and it has a white band across the abdomen. The nymphs burrow into the sand at a depth usually less than 50 centimetres. The grating, continuous call of the male gives the species its common name.

This set of stamps contains all three stamps from the Cicadas stamp issue. The Cicadas stamp pack contains all three stamps and minisheet from the stamp issue presented in a high-quality folder. The Cicadas minisheet consists of the three stamps from the issue incorporated into a miniature stamp sheet. This maxicard set contains the three maxicards from the Cicadas stamp issue. 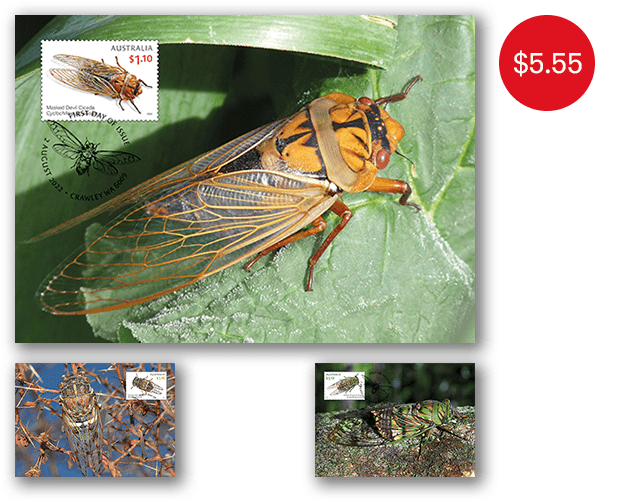