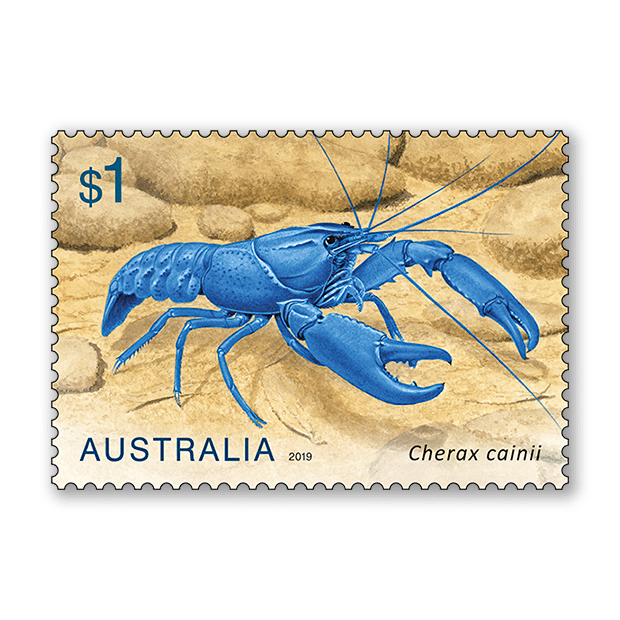 Crayfish are heavy bodied crustaceans with an enlarged, pincer-like pair of front legs. They are Arthropods (as are insects, spiders, centipedes and millipedes), characterised by a hard outer shell made from calcium carbonate that acts as a skeleton. Crustaceans are distinguished from the other arthropods by their two pairs of antennae. Crayfish, like many crustaceans, have a shield running downwards from the head and over the entire thorax, known as a carapace. The carapace protects the gills and facilitates a continual flow of water that enables the crayfish to breathe.

All of Australia’s freshwater crayfish belong to the family Parastacidae, which includes more than 140 species – from the world’s smallest crayfish, the two-centimetre-long Eastern Swamp Crayfish (Gramastacus lacus) to the world’s largest, the Giant Freshwater Lobster (Astacopsis gouldi).

Crayfish can be found in a variety of freshwater habitats such as rivers, streams, dams, lakes and swamps. While crayfish are usually vegetarian, they’re actually capable of eating most things including meat. Crayfish are largely nocturnal, actively foraging at night. Many Australian native crayfish species are threatened and fishing is illegal without a permit.

The stamps in this issue feature illustrations by renowned painter, naturalist and zoologist Roger Swainston.

Growing to around 1.5 kilograms, the Smooth Marron (Cherax cainii) is endemic to rivers and dams of southwest Western Australia. A popular delicacy, the species is commercially farmed and is not threatened. The Smooth Marron is usually black to brown in colour with a rare, naturally occurring bright cobalt blue variation commonly farmed for aquarium display.

The Giant Freshwater Lobster (Astacopsis gouldi) is an endangered species found only in northern Tasmania below 400 metres. This imposing crayfish varies in colour from brown to blue green, can live up to 60 years and weighs up to six kilograms.

The colourful Lamington Spiny Crayfish (Euastacus sulcatus) is typically bright blue with white highlights and red connective tissue. Classified as vulnerable, the species is found in streams in the highland rainforests of south-east Queensland and north-east New South Wales and individuals weigh around 500 grams.

This set of stamps contains all three stamps from the Freshwater Crayfish stamp issue. 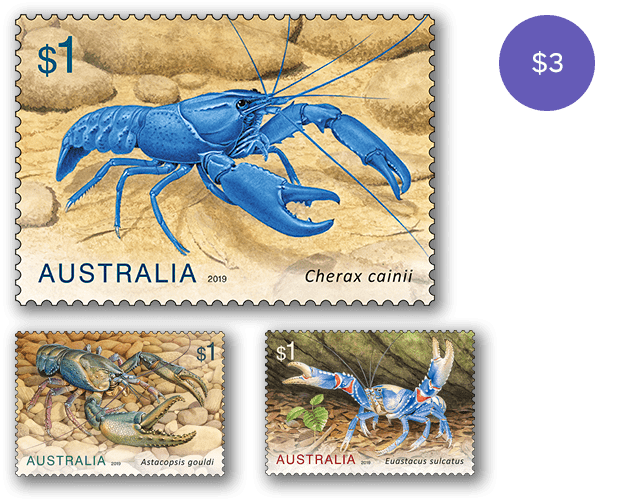 This maxicard set contains the three maxicards from the Freshwater Crayfish stamp issue.