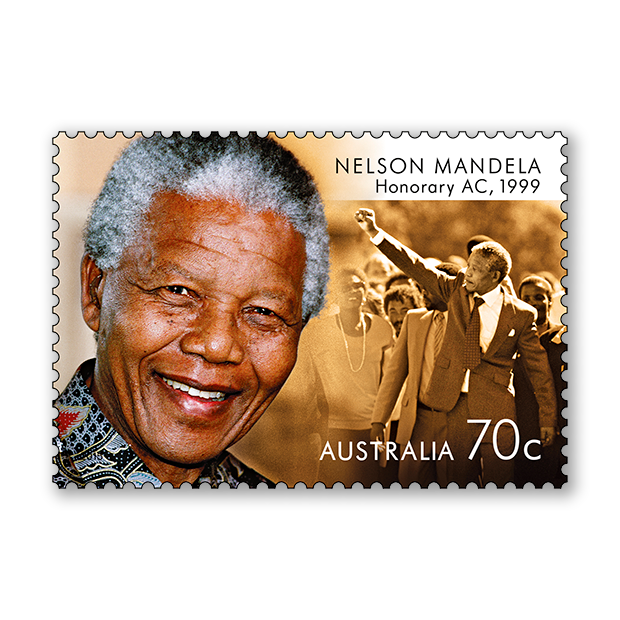 This special stamp issue features three international humanitarians, all of whom have been officially honoured by Australia for their acts of courage, compassion and leadership: Nelson Mandela, Mother Teresa and Raoul Wallenberg.
An appointment to the Order of Australia is the highest recognition of outstanding achievement and service in our national honours system. The Companion of the Order of Australia (AC) is the second-highest level within the Order (the highest are the recently reinstated appointments of Knight and Dame). An AC is awarded “for eminent achievement and merit of the highest degree in service to Australia or humanity at large”.

An Honorary AC can be awarded to non-Australians, as recommended by the Prime Minister. The same post-nominal and medal are used, as the regular award. Honorary awards were first announced in January 1980. Mother Teresa was awarded an Honorary AC by Australia in 1982 and Nelson Mandela in 1999.

Honorary citizenship is a status that countries around the world confer upon those non-nationals considered to be especially admirable or worthy of particular recognition and distinction. In 2013, Raoul Wallenberg became the first person to be granted Honorary Australian Citizenship.

Mother Teresa (1910–1997) was appointed an Honorary Companion of the Order of Australia in 1982 "for service to the community of Australia and humanity at large”.

Born Agnes Gonxha Bojaxhiu, Mother Teresa was a Roman Catholic nun and missionary. Mother Teresa founded the Missionaries of Charity in India in 1948, in order to help the poorest of the poor. The Missionaries of Charity continues to run hospices, schools, soup kitchens, orphanages, counselling programs, mobile dispensaries and clinics around the world, including 12 charity houses in Australia.

Mother Teresa visited Australia at least 12 times during her lifetime. She set up her first charity house in Australia in Bourke, in 1969, followed by another in Melbourne the following year. The work of each charity house depends on the current need that exists, whether for a soup kitchen, a homeless shelter or a crisis refuge for women and children.

Mother Teresa was the recipient of numerous international honours, including the 1979 Nobel Prize for Peace. The stamp design incorporates a photographic portrait of Mother Teresa, wearing her iconic blue and white trimmed sari. The other photograph is of Mother Teresa with orphan babies in Calcutta, symbolic of the beginnings of her world-wide charity work.

Mother Teresa (1910–1997) became an Honorary Companion of the Order of Australia (AC) in 1982, for her significant work to help the poor in Australia and internationally.

Nelson Mandela (1918–2013) was appointed an Honorary Companion of the Order of Australia in 1999 “for Services to Australian-South African relations” and for his “outstanding leadership” in bringing non-racial democracy to South Africa.

After 27 years of imprisonment, for his opposition to the apartheid regime in South Africa, Nelson Mandela helped to end apartheid and create a new constitution for South Africa, for which he was jointly awarded the Nobel Prize for Peace in 1993. Mandela then served as President of South Africa from 1994–1999, showing significant moral courage to build a new South Africa in the spirit of equality and reconciliation.

Nelson Mandela first visited Australia in 1990, just months after the end of his 27 years of imprisonment. This was part of an international tour to thank those countries that pressured for his release. Mandela also visited Australia in 2000, when he was presented with honorary doctorates by two Sydney universities (University of Sydney and the University of Technology, Sydney) in recognition of his significant leadership and struggle for human rights.

Nelson Mandela is known and commemorated the world over for his moral courage and leadership. As a result, he was the recipient of a vast number of honours, in addition to the Nobel Prize for Peace. These include the Grand Croix of the National Order of the Legion of Honour, the US Presidential Medal of Freedom and the Gandhi Peace Prize.

The stamp design incorporates a photographic portrait of Nelson Mandela taken in 1996. He is wearing one of his iconic “Madiba” shirts (“Madiba” is a term of affection used widely in South Africa). The background photograph is particularly powerful, as it was taken on 11 February 1990, the day that Nelson Mandela was released from the notorious prison on Robben Island.

In 2013, Raoul Wallenberg (1912–?) became Australia’s first Honorary Citizen for “his selfless and tireless devotion to human life during the Holocaust”, where he saved tens of thousands of Hungarian Jews during World War Two (estimates say up to 100,000).

Raoul Wallenberg was a Swedish architect and diplomat. He led an extensive mission to save Hungarian Jews from Nazi extermination, by issuing protective passports (Schutz-Pass), providing shelter in diplomatic buildings and thwarting plans to eradicate the Hungarian Jewish ghetto, at great personal risk. A significant number of those saved came to Australia. After Soviet abduction in 1945, Wallenberg was seen in various prisons and camps but never rescued. His fate is still unknown.

Before Raoul Wallenberg departed for Hungary as part of the Swedish Legation, he is reported to have said to his friends, “I shall try and save as many lives as possible from the claws of death. “ And he indeed went above and beyond, including negotiating, and often arguing, directly with high-ranking Nazi officials. Despite no previous diplomatic experience, Wallenberg even managed to raise the number of protective passports he could issue, which also saved thousands of lives.

Twice-nominated for the Nobel Prize for Peace, Wallenberg has been officially recognised internationally, including as an Honorary Citizen of Canada, Israel, Hungary and the USA and with the US Congressional Medal for Bravery.

The stamp design features a photographic portrait of Wallenberg, recently discovered in the National Archives of Hungary, as part of his Hungarian Visa application. The image of Wallenberg standing was taken around 1937 and is there to symbolise his bravery and determination. The yellow star an example of the badge that Hungarian Jews were forced to wear for identification purposes and as a means of humiliation. It was supplied by the Jewish Holocaust Centre in Melbourne. The Schutz-Pass featured was one issued by Wallenberg to an Australian survivor. It symbolises the return to dignity and path to safety that Wallenberg secured for so many.