Yorta Yorta man Douglas (Doug) Ralph Nicholls (1906–88) was a footballer, pastor, Aboriginal rights campaigner, leader and state governor. In 1972, he became the first Aboriginal Australian to be knighted – an anniversary that this stamp issue commemorates.

Nicholls’ compassion and consummate skills in responding to social justice issues, particularly Aboriginal disadvantage, greatly improved the wellbeing of his community. Nicholls and his wife, Gladys, also a community leader, worked closely and tirelessly with young Aboriginal people arriving in Melbourne. In 1936, Nicholls joined fellow Yorta Yorta man (and great-uncle) William Cooper to found the Australian Aborigines’ League, which sought to bring Aboriginal people under federal rather than state law. In 1957, he helped found Victoria’s Aboriginal Advancement League, which lobbied federal government on issues relating to Aboriginal wellbeing and equality, including in the lead up to the 1967 Referendum. This work extended to protesting the impact of the Woomera rocket range on the people of the Warburton Ranges, the omission of Aboriginal people from Victoria’s jubilee celebrations, and the practices of the Victorian Aboriginal Protection Board. In 1957, Nicholls joined the board (by then renamed the Aborigines’ Welfare Board) as an Aboriginal representative, but he quit when it sought to close the Lake Tyers Reserve in Gippsland, leading to a march on the Victorian Parliament. Nicholls was also the Victorian secretary of the Federal Council for Aboriginal Advancement, established in 1958. A cultural bridge builder, Nicholls was driven by a belief in meaningful reconciliation between black and white Australia.

Renowned for his modesty, Doug Nicholls was nevertheless much decorated for his achievements in social justice work and addressing Aboriginal disadvantage. In 1957, he was awarded an MBE for “services to Aboriginal people” and, in 1968, he became the first Aboriginal Australian to be awarded an OBE for this work. In 1972, he received his first knighthood, bestowed for “distinguished services to the advancement of the Aboriginal people”. Doug Nicholls was also the first Aboriginal Australian appointed to a vice-regal office, when he became the Governor of South Australia in 1976. The Queen bestowed a second knighthood on Nicholls when he hosted her on the 1977 royal tour, the prestigious Knight Commander of the Royal Victorian Order.

Doug Nicholls is memorialised in public culture through the naming of the Sir Doug Nicholls Oval in Northcote, Sir Doug Nicholls Indigenous Round (AFL), and the Canberra suburb of Nicholls. A bronze statue by Louis Laumen in Melbourne’s Parliament Gardens also acknowledges Sir Doug and Lady Nicholls’ important place in public life.

The stamp design features two photographs from the National Archives of Australia. The first, a portrait taken in 1980. The second, taken in 1977, depicts Nicholl’s inauguration as Governor of South Australia.

The Pastor Sir Doug Nicholls sheetlet pack contains the sheetlet of 10 x $1.10 stamps from the stamp issue presented in a high-quality folder. The Pastor Sir Doug Nicholls maxicard is a prepaid* postcard with the single stamp from the stamp issue affixed and postmarked on the view side. 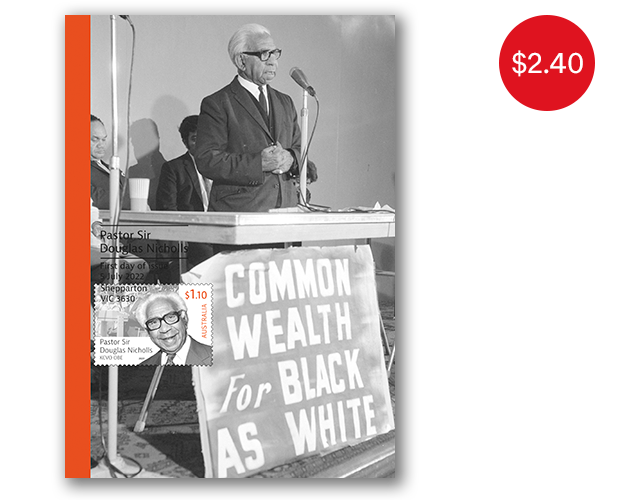