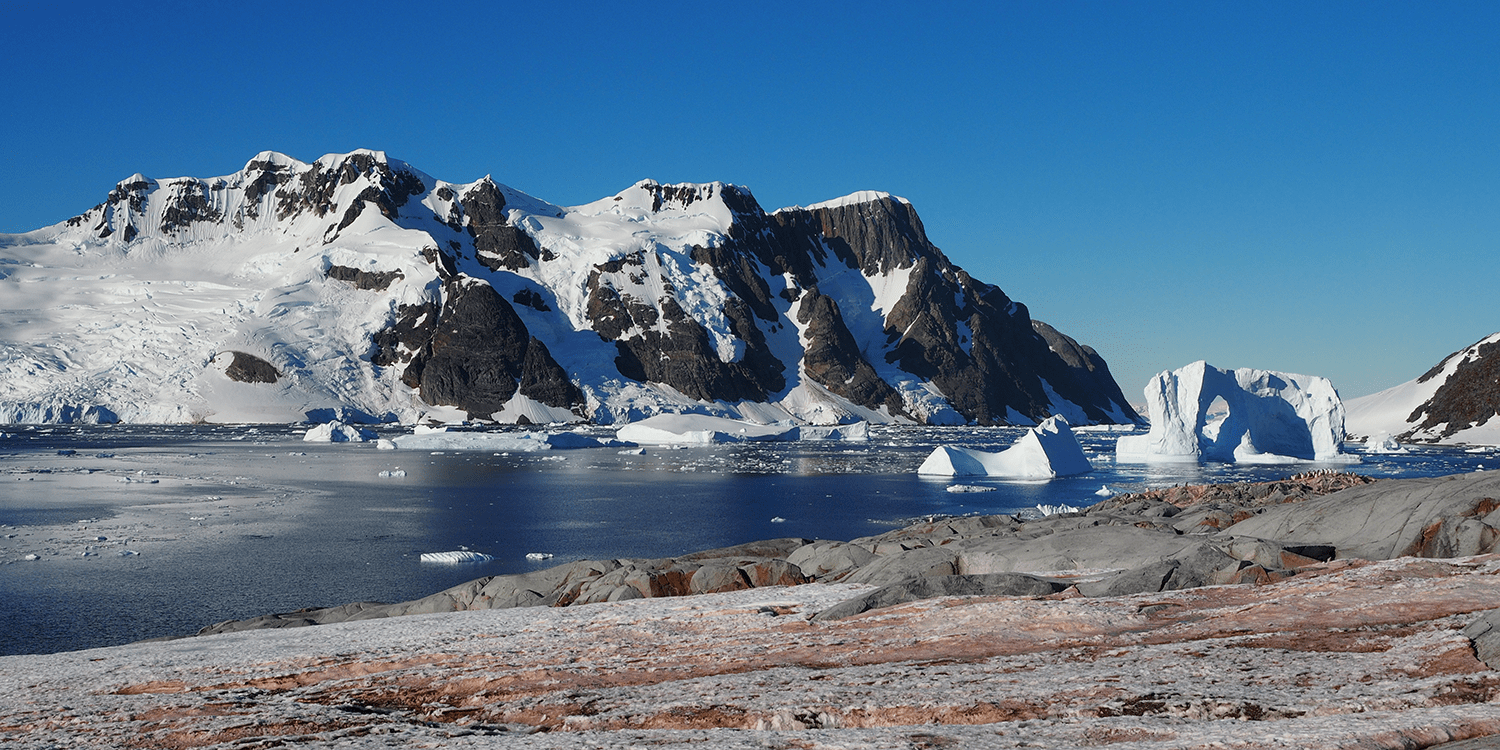 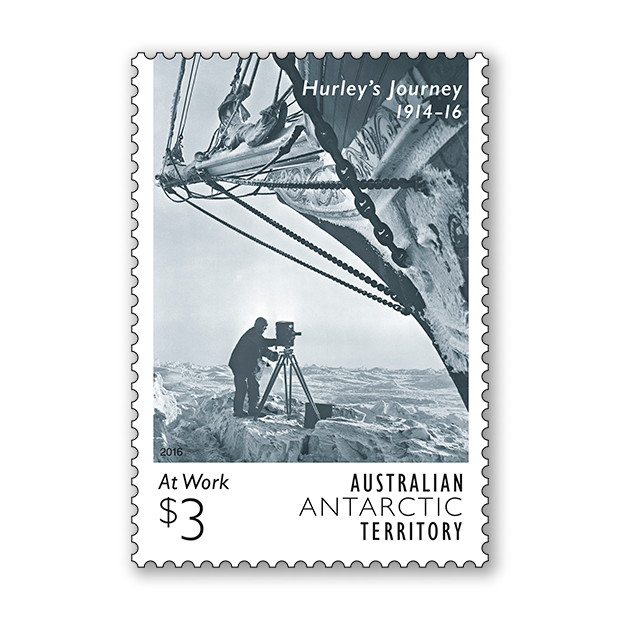 Many of the stamps developed by Australia Post for the Australian Antarctic Territory (AAT) stamp issue program have featured famous expeditions and those associated with them, including the Australasian Antarctic Expedition led by Douglas Mawson (50 years commemorated in 1961 and the centenary in a four-year series between 2011 and 2014).

James Francis (Frank) Hurley (1885–1962) became one of Australia’s most distinguished documentary photographers. He is particularly well known for his photographs of Antarctica, a place that had long been shrouded in mystery to the Australian general public.

During Shackleton’s expedition, under extreme conditions, Hurley took black-and-white stills as well as moving images and the first colour photographs of Antarctica, using the newly developed Paget colour plate system. As well as his regular photography, Hurley also created composite exposures and images that included drawings, in order to convey the drama and emotion of the moment.

The stamps in this issue tell a visual narrative of the expedition through Frank Hurley’s eyes. This is despite the fact that Hurley had to abandon much of his equipment and glass-plate negatives when one of the expedition’s ships, the Endurance was crushed by pack-ice somewhere in the Weddell Sea. As a result, Hurley had only his pocket camera and three rolls of film to capture the rest of the gripping story, as it unfolded.

London’s Royal Geographic Society holds the largest collection of Hurley’s original negatives from the expedition, and this stamp issue uses reproductions from that collection. 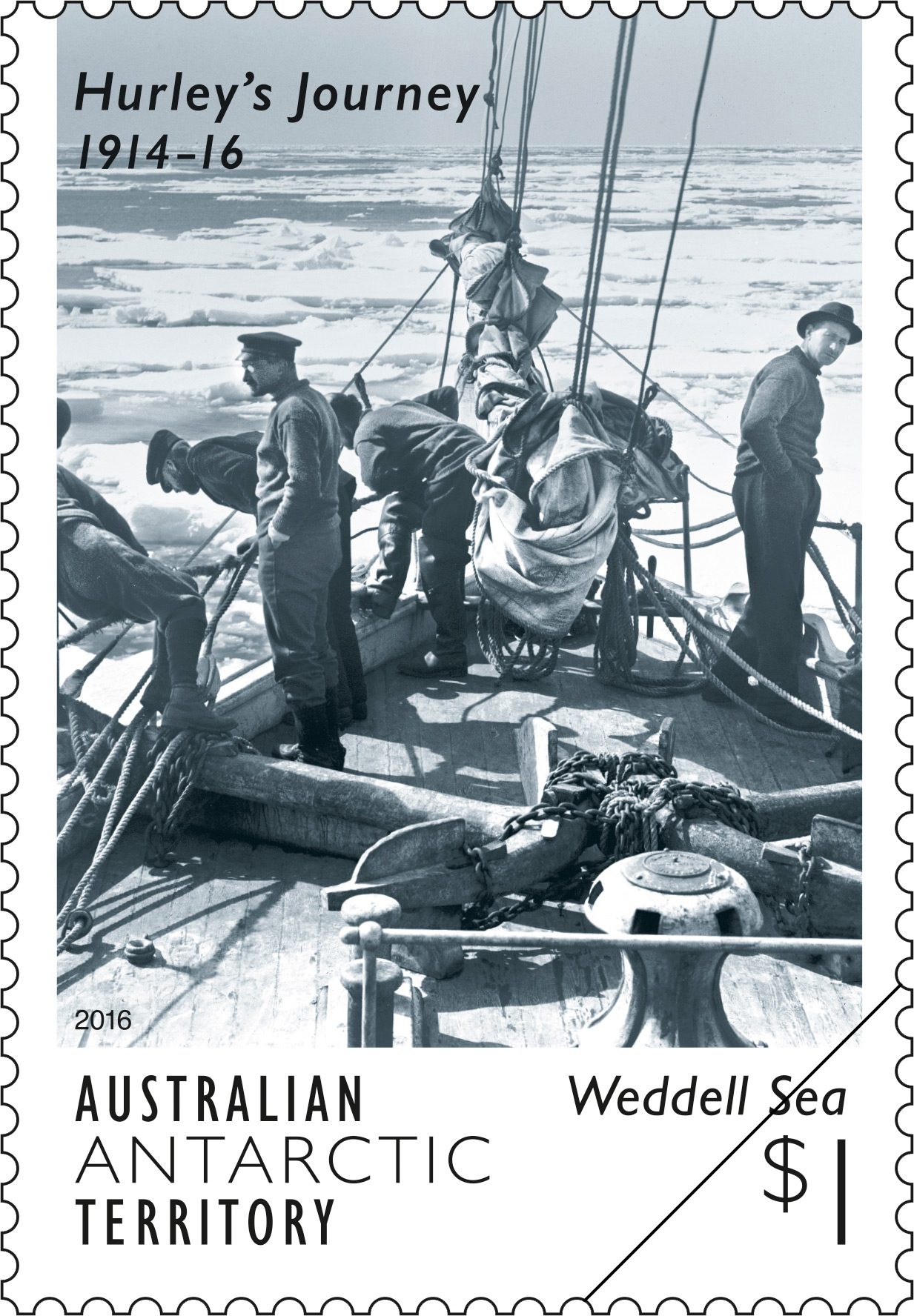 The Endurance left South Georgia on 5 December 1914, sailing through the icy Weddell Sea. Despite nearly reaching its destination near Vahsel Bay, it became trapped in the pack-ice.

At the same time, the supply ship Aurora headed to McMurdo Sound in the Ross Sea, to drop supplies for the main party who had hoped to cross there by foot. It soon became clear that the men would not be able to free the ship from the pack-ice, despite their best attempts.

The men anxiously waited out the winter, but the Endurance was eventually crushed by the pressure of the ice in October, disappearing beneath it a month later. Forced to abandon the ship, the men camped on the icefloe, which drifted slowly north for five months until April 1916.

Once the icefloe broke up, the men fled in three lifeboats, making it to the inhospitable Elephant Island. 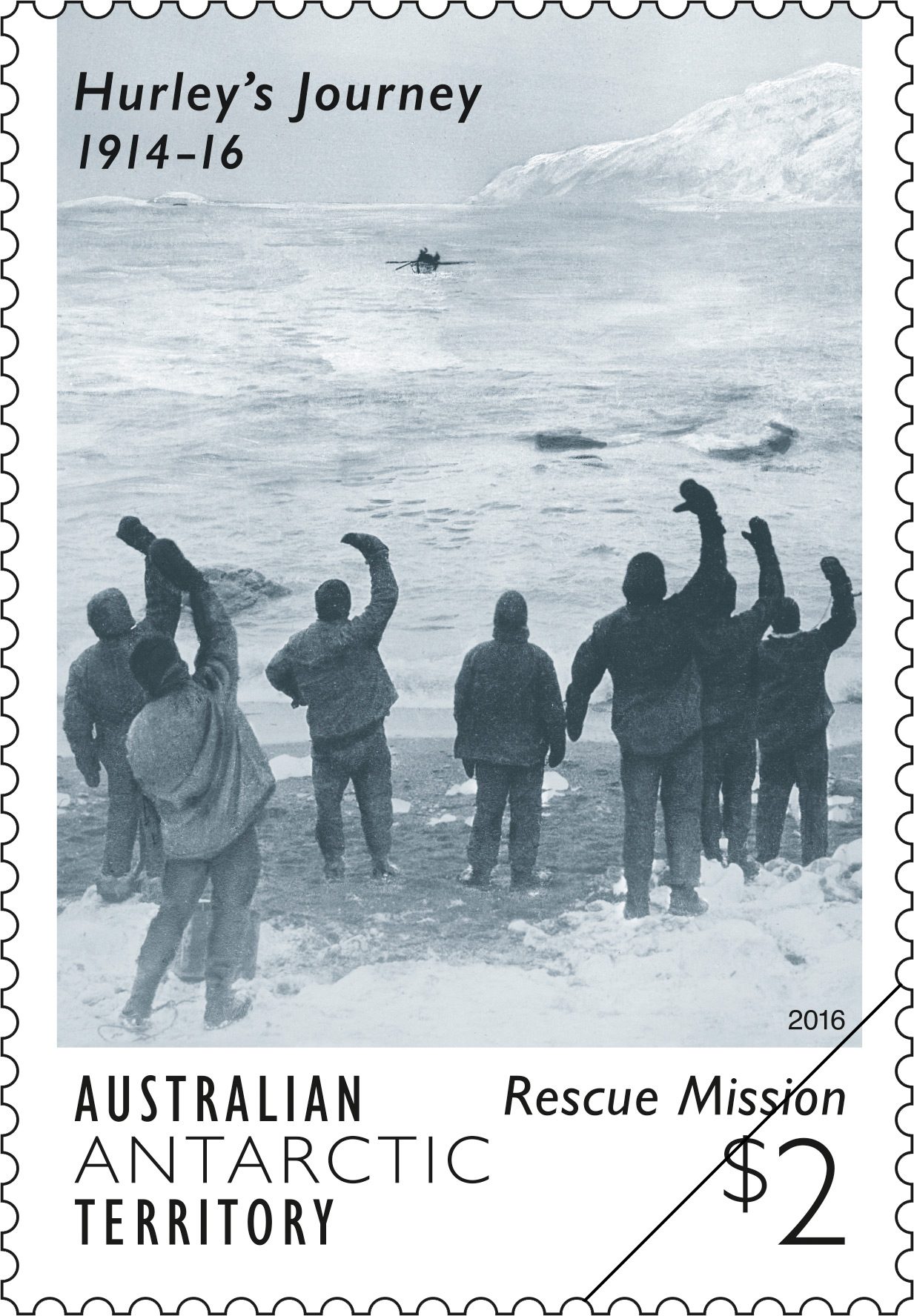 On reaching Elephant Island, it became clear that survival was dependent on Shackleton, with five of his men, making the 1,250 kilometre journey to South Georgia in a lifeboat to seek help.

Amazingly they made it, returning in the Chilean trawler Yelcho on 30 August to save the remaining 22 men. The stamp shows the lifeboat being farewelled from Elephant Island. In this stamp, Frank Hurley is shown using his large-format camera to shoot the bow of the entombed Endurance, making for a powerful self-portrait.

Hurley arrived back in London in November 1916. Shackleton did not return home until May 1917, first travelling to collect the Ross Sea party, who were travelling on the expedition’s supply ship, The Aurora.