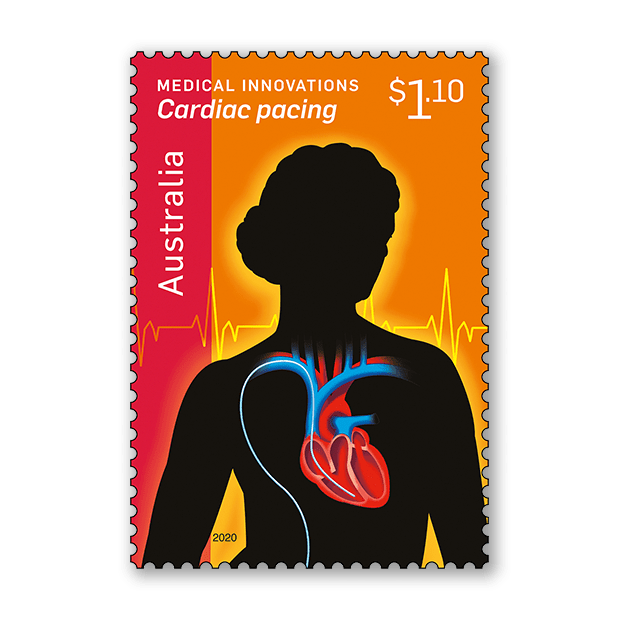 Since the early 20th century, Australians have played a key role in medical innovations, technology and theory. The early founding of various research institutes around the country enabled advances in medicine, just as the establishment, in 1936, of the National Health and Medical Research Council, a body providing funding and expertise for medical and health research, has helped foster a national research and development culture.

Life-changing medical innovations that have benefited from Australian capability include the first electronic pacemaker (1926), clonal selection theory in immunology (1957), the ultrasound scanner (1961), the Cochlear implant (1978) and anti-flu medication (1996) among others.

These bold illustrated stamps, by Nigel Buchanan, showcase four medical innovations, each of which is an example of close collaboration between experts across institutional and national borders. Two of the innovations, the electronic pacemaker and medical use of penicillin, were created in the mid-20th century; and two, spray-on skin cells and the HPV vaccine, were developed in more recent times.

In 1991, Brisbane-based immunologist Professor Ian Frazer and Chinese virologist Dr Jian Zhou combined their expertise to develop the technology that has enabled the world’s first vaccine to prevent cancer. Known by the commercial name Gardasil, the first version of the vaccine, approved for clinical use in 2006, protected women against four of the many strains of the human papillomavirus (HPV) known to cause three-quarters of all cervical cancers. Since then, Gardasil 9 has been developed to protect against another five strains, seven of the nine being responsible for around 90 per cent of HPV-related cancers in women and 95 per cent in men.

The origins of the pacemaker – that vital chest-implanted mechanism that regulates the heartbeat – can be traced back to an external device that delivered electrical stimulation to the heart. This was designed by Sydney-based physician anaesthetist Dr Mark Lidwill MD (1878–1968) with physicist Edgar H. Booth (1893–1963), in 1926, and successfully trialled in 1929, or just before. Lidwill did not patent his pacemaker and there are no records or photographs of the machine, but nor is there any uncertainty regarding its first clinical success. American Dr Albert Hyman built and patented his cardiac pacemaker in New York in 1932. But he recognised the Australian duo’s prior achievement, writing that Lidwill had already made and successfully used such a device.

Surgeon and researcher Professor Fiona Wood and her colleague Marie Stoner recognised the opportunity of tissue engineering technology in the treatment of burns victims, using the capacity of the skin cells to grow in the laboratory to cover large areas of injured skin and help it to heal. Prior to 1994, the cells were applied as a sheet, but Wood and Stoner developed an alternative delivery method to spray the skin cells on the wound as a suspension. They then developed a portable kit to use in the operating theatre to harvest the cells for immediate use delivered directly on the wound as an aerosol. The point-of-care medical device is used to reduce the donor site needed, the healing period and scarring.

Australian-born pathologist Howard Florey (1898–1968) and German-born biochemist Ernst Chain are credited with making possible the medical use of penicillin – the first naturally occurring antibiotic to successfully treat bacterial diseases. In 1928, Alexander Fleming discovered the anti-bacterial properties of penicillin, but Fleming could not find a way to extract the active substance to clinically test it for medical use. In the 1930s, Florey and Chain headed an Oxford-based team that was able to isolate, extract and test the active substance occurring in the penicillium strain of mould. Australia was also soon at the forefront of producing this life-saving medical penicillin at scale, initially for use in the treatment of soldiers towards the end of WWII. It was also the first country to make it available for civilian use.

This set of stamps contains all four gummed stamps from the Medical Innovations stamp issue. 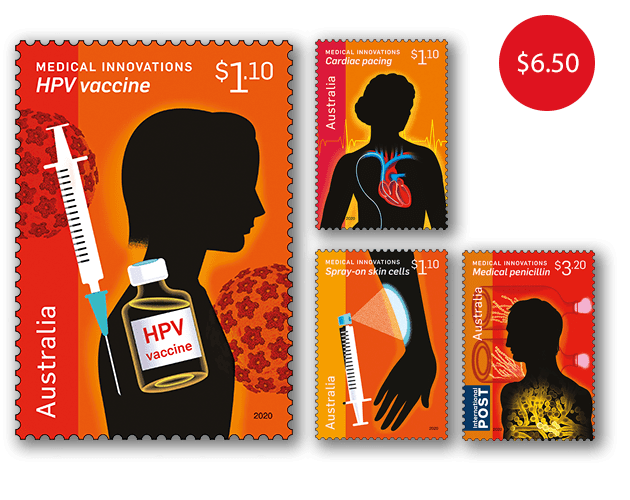 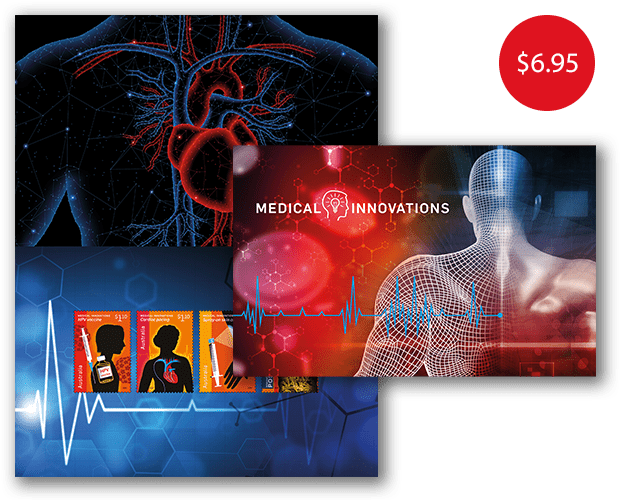 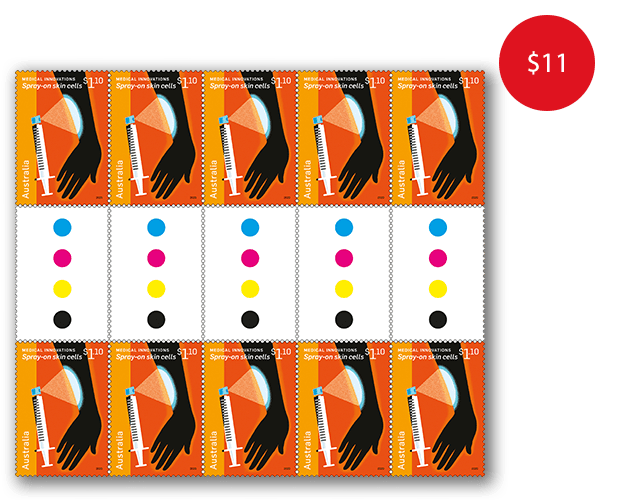 This maxicard set contains the four maxicards from the Medical Innovations stamp issue. 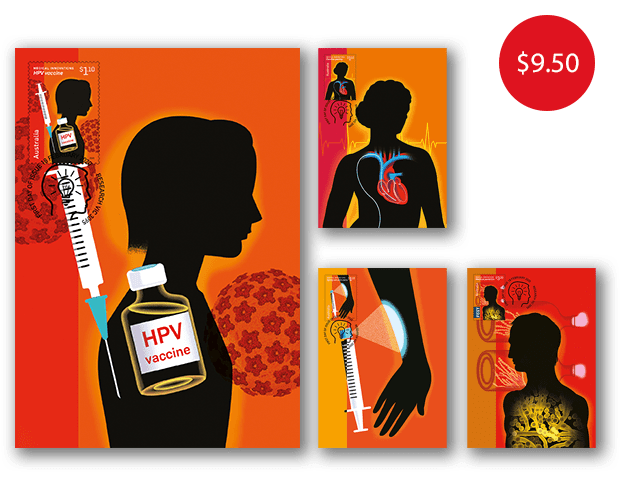