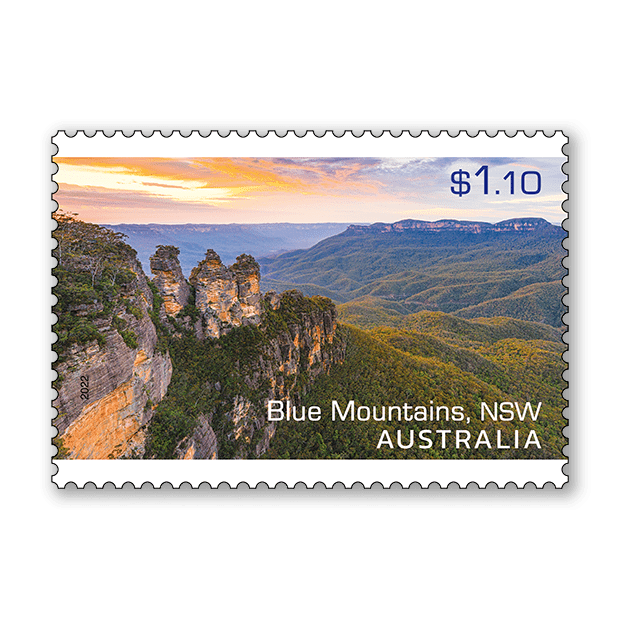 Through the World Heritage Committee, the United Nations Educational, Scientific and Cultural Organisation (UNESCO) seeks to encourage the identification, protection and preservation of cultural and natural heritage of outstanding value to humanity. To be inscribed onto the World Heritage List, a landscape must meet at least one of ten criteria, which include: being an outstanding natural example of a type of landscape which illustrates a significant stage in human history; containing superlative natural phenomena or areas of exceptional natural beauty and aesthetic importance; including outstanding examples that represent major stages of earth's history; and featuring the most important and significant natural habitats for in-situ conservation of biological diversity.

The stamp photograph is of the Three Sisters at Katoomba, NSW and is by Daniel Willans via Getty Images. These three prominent sandstone peaks formed around 200 million years ago and are situated on the north escarpment of the Jamison Valley. According to the Dreamtime, the peaks were once three sisters who were turned to stone and now watch over the land of the Darug, Gundungurra, Wiradjuri and Dharawal peoples.

The Flinders Ranges (inscribed 2011) is a semi-arid mountainous landscape. It features diverse landscapes, rich biodiversity and an exceptional geological record of the dawn of animal life on Earth.

¬The stamp photograph, by tim phillips photos via Moment Open/Getty Images, is of Wilpena Pound – a 17-kilometre-long by eight-kilometre-wide oval-shaped mountain formation, with a central sunken amphitheatre. It is situated in the Ikara-Flinders Ranges National Park (Ikara translates as “meeting place” in the traditional language of the Adnyamathanha people).

The Ningaloo Coast (inscribed 2011) supports exceptional biodiversity of marine and terrestrial life and is one of the longest near-shore reefs in the world with an extensive karst system and network of underground caves and water courses.

The Gondwana Rainforests (inscribed 1986), which extends into Queensland and New South Wales, includes important volcanic features, and it supports the most extensive subtropical rainforest in the world. It is the principal habitat for many rare and threatened rainforest species, some with origins in the ancient supercontinent Gondwana.

The stamp design features Dangar Falls in Dorrigo National Park, in a photograph by zetter via iStock/Getty Images. Dangar Falls is a 30-metre waterfall, set amongst farmland and situated around two kilometres from the small agricultural town of Dorrigo.

This set of stamps contains all four stamps from the Our Beautiful Continent stamp issue. The Our Beautiful Continent stamp pack contains all four stamps from the stamp issue presented in high quality folder. 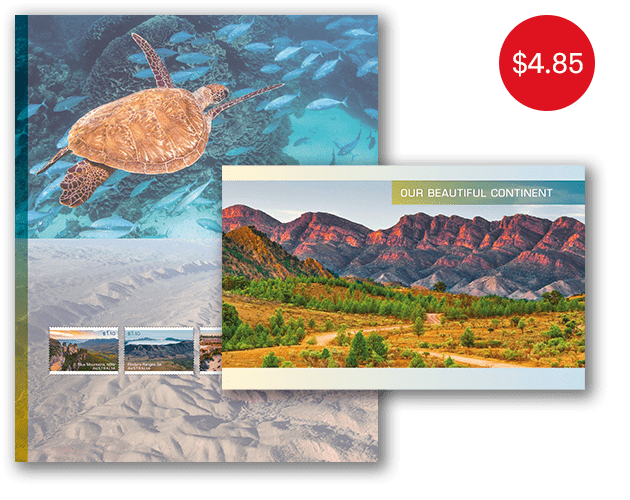 This booklet contains 10 x $1.10 self-adhesive stamps from the Our Beautiful Continent stamp issue in a convenient wallet sized booklet. Set of Our Beautiful Continent Maxicards

This maxicard set contains the four maxicards from the Our Beautiful Continent stamp issue.