From Pitcairn to Norfolk through stamps

In 1831, due to Pitcairn Island’s small size, the island’s population made a short-lived and disastrous relocation to Tahiti, losing 20 per cent of their people to disease. Although they returned to Pitcairn soon after, finding a new home was still a pressing necessity. In discussions with British government representatives, Norfolk Island was one of the options put forward, it boasting fertile soil and having no continuing settlement (the second British penal settlement there was due to close).

Central to the efforts to secure a new home was community leader, minister and school teacher George Hunn Nobbs (1799–1884). Born in Ireland, Nobbs sailed three thousand miles from Callao, Peru, with one other person, before arriving at Pitcairn Island in 1828. In 1829, Nobbs married Sarah Christian, grand-daughter of Fletcher Christian, the infamous leader of the Bounty mutiny, who had fled to Pitcairn to escape capture. Despite a brief departure from Pitcairn during the despotic rule of Joshua Hill, Nobbs returned and became a spiritual leader of the community, a role he took on with total devotion.

Nobbs was granted an audience with Queen Victoria in 1852 (and ordained as a minister at this time), after greatly impressing a British admiral who had visited Pitcairn that year. Nobbs also had a monetary fund in place from a group he had been corresponding with in England, the Friends of Pitcairn. The group had been sending reading and writing materials to Pitcairn to enable him to continue educating the population, and Nobbs made a presentation to the group while he was in England.

It is said that Queen Victoria was impressed with the apparent piety of the community. The Pitcairn Islanders were granted permission to relocate to Norfolk Island, receiving official word in 1854 of the official decision of Her Majesty’s government. On 8 June 1856, the entire Pitcairn population (193 people, plus one birth at sea — Reuben Denison Christian) concluded a harsh 33-day voyage to their new home.

This fascinating story of the third British settlement on Norfolk Island is the subject of the Norfolk Island: Pitcairn Settlement stamp issue, which will be released on 22 January 2019. The stamps, designed by Jo Muré of the Australia Post Design Studio, feature engravings of George Hunn Nobbs and Queen Victoria. 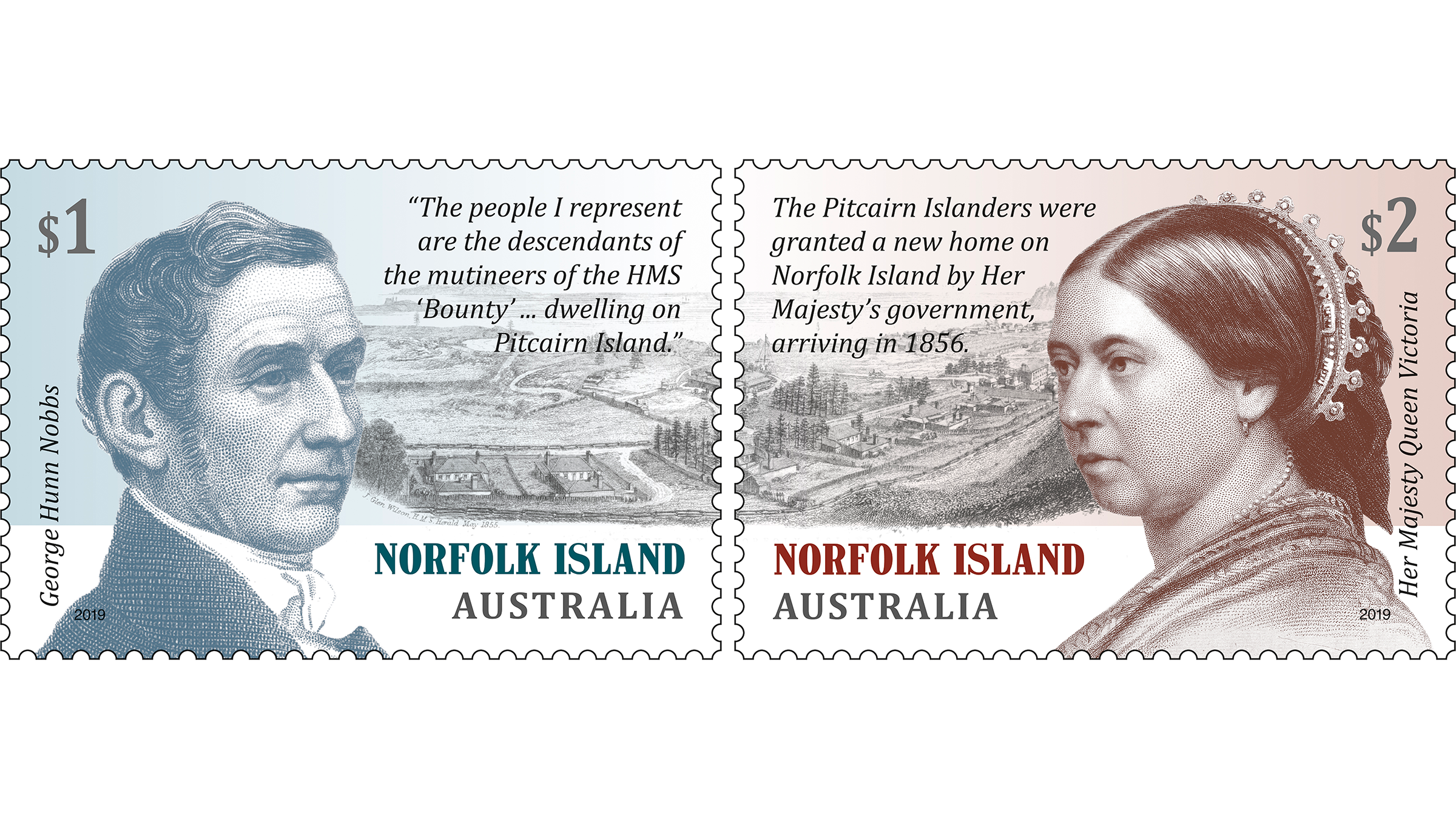 The voyage to Norfolk was a harsh one. The newcomers, tired and seasick, arrived to strong winds and pouring rain. Although the second penal settlement on Norfolk Island had closed the year before, the Commissariat Storekeeper Thomas Samuel, and his wife Isabella, had stayed behind to keep the land in order. They were there to meet the Pitcairn Islanders, and stay for two weeks to help them acclimatise and become educated in farming techniques. Captain Denham of the HMS Herald had also been sent to Norfolk Island to assist with the new community’s arrival.

In his diary, George Hunn Nobbs states, “…very much disappointed with its appearance from the present point of view…Every face wore an expression of disappointment…No doubt other parts have a better appearance, but this side certainly bears no comparison with our Rock in the West.”

In her diary, Nobbs’ wife, Sarah Christian was a little more hopeful:
“(It is) … such a bewildering place. Everything was so strange; the immense houses, the herds of cattle grazing, and in the distance the gigantic Norfolk pines filled us for the moment with amazement. I was conducted … to the Government House, and seated by a good fire in the drawing room (I have learned that name since), which was the first fire I had ever seen in a dwelling house, and an excellent addition to my previous ideas of domestic comfort …”

The Pitcairn Islanders’ first accommodation was the New Military Barracks, as abandoned by the second penal settlement. The newcomers then moved to the various buildings in Kingston that had also been used by officers of the penal settlement. In 1858, the head of each household was allocated a fifty-acre lot, away from Kingston.

The minisheet design from the stamp issue features the original Plan of Allotments. (View a large scale map of the Norfolk Islands Plan of Allotments from 15 December 1858). On it, you can see the hand-written surnames of each family. Many of these surnames still exist on Norfolk today.

By the end of 1856, Nobbs seemed to have realised the move was a wise one, writing, “The land is a goodly land … and needs nothing but a contented mind, a persevering spirit and a grateful heart …”

Although many were homesick, George Hunn Nobbs did much to keep the bourgeoning community together, with only a few taking the opportunity to return to Pitcairn (in 1858 and 1863). By 1870, Nobbs stepped back from his community work, although he continued to work as chaplain. He died on Norfolk Island on 5 November 1884 leaving behind his wife, 10 children, 65 grandchildren and 19 great-grandchildren.

The arrival of the Pitcairn Islanders to Norfolk Island is celebrated every year on 8 June as Anniversary Day, also referred to as Bounty Day. Many Norfolk homes and buildings still contain portraits of Queen Victoria, in honour of what George Hunn Nobbs referred to as, “Her Majesty’s most gracious offer”.

The Norfolk Island: Pitcairn Settlement stamp issue is available from 22 January 2018, online, at participating Post Offices and via mail order on 1800 331 794, while stocks last.